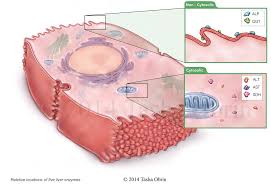 Liver enzymes are substances produced by the liver that can be measured with a blood test. Any elevation in an enzyme level may be a sign of a liver problem, and aspartate aminotransferase (AST) and alanine aminotransferase (ALT) are two of the enzymes central to such an investigation. When used comparatively, AST and ALT can help identify liver toxicity, liver disease, or liver damage.

Roles of AST and ALT

Aminotransferases are chemicals that the liver uses to make glycogen. Glycogen is the stored form of glucose, a sugar that the body uses for energy. Any glucose not immediately used will be converted into glycogen and stored in cells for future use. Most will be stored in the liver, while the remainder will be warehoused in skeletal muscles, glial cells of the brain, and other organs.

Aspartate aminotransferase (AST) is found in a variety of tissues, including the liver, brain, pancreas, heart, kidneys, lungs, and skeletal muscles. If any of these tissues are damaged, AST will be released into the bloodstream. While increased AST levels are indicative of a tissue injury, it is not specific to the liver per se.

By contrast, alanine aminotransferase (ALT) is found primarily in the liver. Any elevation of the ALT is a direct indication of a liver injury, whether minor or severe. Occasional increases may occur in association with a short-term infection or illness. Sustained increases are more problematic as they suggest an underlying disease and a greater likelihood of liver damage.

AST and ALT are measured in international units per liter (IU/L). The normal levels vary based on a person’s body mass index (BMI) as well as the individual lab’s reference value. Generally speaking, the normal reference value for adults is:

The high end of the reference range is referred to as the upper limit of normal (ULN). This number is used to establish how elevated your liver enzymes are.Mild elevations are generally considered to be two to three times the ULN. With some liver diseases, the level can exceed 50 times the ULN. Levels this high are described as deranged.

While it may seem that a high ALT is all that is needed to diagnose liver disease, its relationship to AST can provide valuable clues as to what exactly is going on and whether the issue is acute (occurring suddenly and progressing rapidly) or chronic (long-standing or persistent).If the liver sustains an acute injury, you can expect to see a sudden spike in the ALT. On the other hand, if a liver disease is slowly progressing, the damage incurred by the liver will gradually affect other organs as well. As these organs are damaged, the AST will begin to rise.This occurs with diseases like hepatitis Cin which long-term liver damage will trigger an ever-expanding array of symptoms involving the kidneys, brain, eyes, skin, and joints (referred to as extra-hepatic symptoms).This enzyme relationship can be described diagnostically with the AST/ALT ratio. This is a calculation that compares the levels of AST and ALT in your blood. Depending on which value is elevated and the extent of that elevation, doctors can often get a pretty strong indication as to what disease is involved.

What the AST/ALT Ratio Reveals

The AST/ALT ratio is important insofar as the pattern of elevation can tell a lot about the condition involved. Among the general guidelines used to diagnose liver disease:

However, a disease cannot be diagnosed by the pattern of elevation alone. The magnitude of elevation described in multiples of the ULN also needs to be evaluated. It is only when the magnitude is above a certain threshold that the ratio can be considered diagnostic.

A diagnosis would also be supported by other liver enzyme test results, including albumin, bilirubin, and gamma-glutamyl transpeptidase (GGT).

When Testing Is Recommended

AST and AST are part of a comprehensive testing panel known as the liver function test (LFT). An LFT may be ordered:

Even beyond the scope of liver disease, an LFT can assess whether a drug (prescription or over-the-counter) or an herbal remedy is causing liver injury.If the lab test is processed on-site, the results can be returned within hours. Otherwise, your doctor will usually receive the results in anywhere from one to three days.

An Overview of Chronic Obstructive Pulmonary Disease (COPD)
6 Ways to Prevent Congestive Heart Failure
Causes of Unintentional Weight Loss
What Diseases Do Gastroenterologists Treat?
Common Sexually Transmitted Diseases (STDs) You Should Know About
Differences Between Dementia and Alzheimer’s
Overview of Emphysema
Is Blue Waffle Really an STD?
What Is an Electrocardiogram (ECG)?